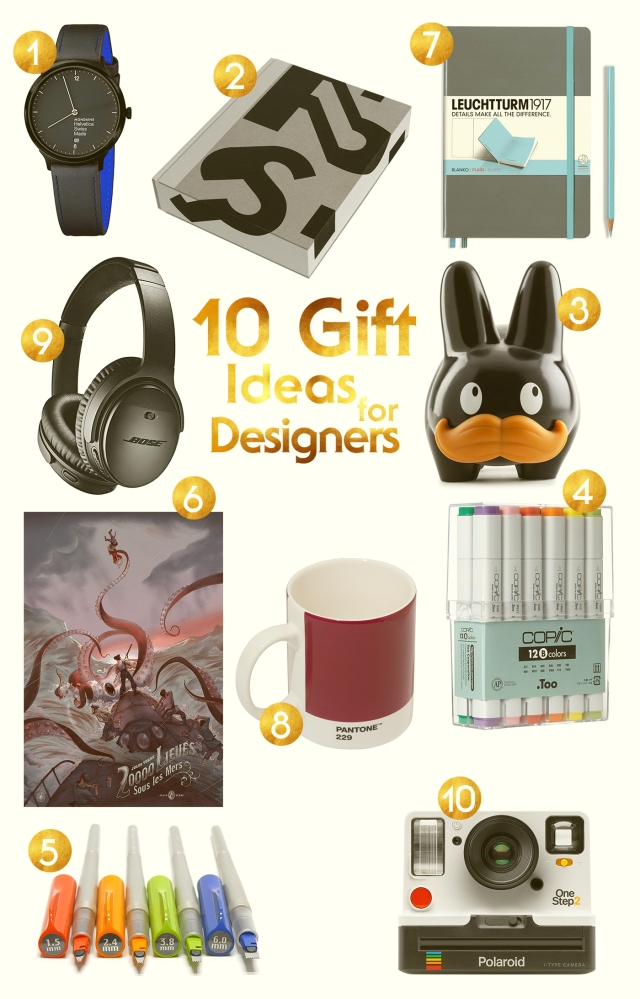 20 days until Christmas! But who’s counting?! Me, me, me!! I’m definitely on the countdown for Christmas and can’t wait to make our Christmas dinner again this year! I may be a little late for this post (or not) because I’m planning to buy Rafael’s Christmas present(s) this week. I never do these kind of posts around here, but I thought it would be fun to do it this year 😀 Since Rafael is a graphic designer, I decided to ask him what cool gifts he would like to get and make a list out of it. Now, he already has a couple of gifts from the list, and I would definitely love to give him the others, but I already had set my mind on a different thing, so maybe he’ll get them in the future…hahaha I think I created a pretty cool and diverse gift list, with some easy affordable things, and some that requires a little bit more money….so pick how many you like! haha Hope you enjoy!

1- Mondaine Watch Helvetica Celebration – If you are not a graphic designer, maybe you don’t know that Helvetica is a type face which is widely used around the world. But if you have a friend, boyfriend or girlfriend, husband or wife, who is obsessed with typography (like Rafael), you definitely know the importance of Helvetica in graphic design, for example, Massimo Vignelli (an Italian designer) designed the New York subway wayfinding using Helvetica. So it was only a matter of time, for a Swiss watch company to make homage to the famous Swiss type face. In the picture, I chose the Mondaine Helvetica No1 New York Edition Blue, because it has more Rafael’s style, a mix of classic and sport, with a little bit of boldness. But there are many beautiful options to choose from, so be my guest 🙂

2- Paula Scher’s most recent book: Works. Paula is Rafael’s graphic designer goddess, seriously, this woman is amazing! She has done so many beautiful things in her career and her new book is here to prove it!

3-  Labbit, by Frank Kozik – one of my favourites, because I already gave one to Rafael a while ago (sadly he is still in Brazil, but don’t worry little guy, we’ll get you back!). I gave him the red smorkin’ labbit from Kidrobot, but I didn’t find it this time on their website, so I chose another option to put here, but don’t worry, there are some sick labbits just waiting to be taken home!

4- Copic Marker Set – maybe my dream gift to Rafael, these markers are so expensive, but they are like nothing else. Professional illustrators love them, and since Rafael loves to illustrate in his free time, a set of these markers would definitely make him happy!

5- Pilot Parallel Pen – Rafael has three out of four, which he bought a while ago and uses a lot. He loves to use them to write in black letter style, but they are widely used also with different styles of calligraphy.

6- Limited edition screenprinted posters – A group of amazing graphic designers decided to re-interpret iconic movie posters, Rafael would love to have one in our living room for sure, such a beautiful work!

7- Leuchtturm Notebooks – Moleskine’s German rival….hahaha but seriously, Rafael has had more than one since we got here, it’s definitely a good sketch notebook to always have in hand.

8- Pantone Mug – We are big mug fans and collectors, and as a graphic designer, this Pantone mug is a must have! Rafael has a blue one, which he got on his birthday.

9- Bose QuietComfort 35 Wireless Headphones II – Another present that I wish I could give him, but also, so expensive….Rafael only works with headphones on, his current one is literally falling to pieces, but still works, so that’s good…hahahaha who wouldn’t like a wireless headphone, even I would like one! hahaha

10- New Polaroid Camera – Yes folks, Polaroid finally heard our wishes and came back! This is such a fun gift that reminds us of our childhood (that is, if you were an eighties ou nineties kid! hahaha talk about getting old…) Rafael has a vintage Polaroid, but is not working so good, so I would definitely give him the new version for sure!

Have fun doing some Christmas shopping, but also remember to share and give lots of love!