Sourdough bread, I have been postponing this letter for quite a while now, but this doesn’t mean that I love you less. On the contrary, my love for you grows stronger and stronger, like the wild yeast that lives inside you. No store bought bread can be compared with you, you are unique, powerful and yet simple. Simple by origin, but a bit tricky to know and understand you. After some time being acquainted with you, one cannot turn his back nor forget you, because what you offer is truly life changing. You show us how life can be simple, but it takes knowledge, patience and persistence to earn the big revelation. It is a privilege to have you in my daily life, and I really do wish that with this letter, I will incite the minds of others, to come back to a simpler, yet extraordinary time.

Ok, ok, so, did I make up your mind about sourdough bread?! Maybe you don’t know what  sourdough bread is, I know I didn’t for basically my whole life! And let me tell you, what a waste that was! hahahaha But let me tell you my story, when I was living with my aunt back in my teen days in Brazil, I used to help her bake homemade bread….potato bread, classic homemade bread, cornmeal bread…but she always used store bought dry or fresh yeast, and I thought that was it…it couldn’t get more homemade than that! Boy, was I wrong! (if you are a sourdough baker at home, you are pretty much laughing hard right now…hahahaha no problem!). Last year, I decided that I would try to bake my own bread, if I haven’t mentioned before, bread has a major roll in the basic brazilian diet, our typical breakfast (at least in the state of São Paulo) is bread with butter accompanied by black coffee, or in my case chocolate milk or tea (I’m not a big fan of drinking black coffee, never learned to like the taste of it, although I love its smell in the morning, but don’t get me wrong, I love a big cup of cappuccino! true coffee lovers must be dying right now! hahahha). So naturally, bread is one of the things that I most love in life, all kinds of it, and I can’t imagine my life without it! I don’t know why gluten is the new devil in our society, and because of this many people started to exclude bread from their diets…I totally respect that, although as a bread lover, I find it crazy…hahahha but I’m not here to judge anyone, I just believe that balance is the key to good diet and nothing should be consumed in excess. 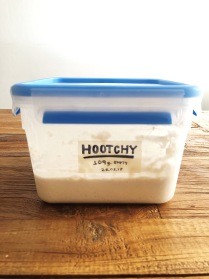 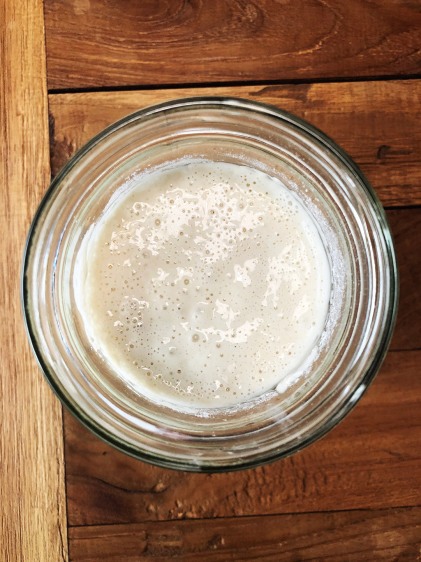 Naming your starter if very fun as well, we choose Hootchy because this was also a way to make alcohol a long time ago! The smaller jar is what Rafa takes out of Hootchy when he bakes a loaf of bread, he usually uses around 200 grams, see how bubbly it gets?! Pretty cool!!

So after I tried baking a few types of bread at home, Rafael got curious about bread and started watching some videos on youtube about it, he got even more interested after we watched Cooked on Netflix, there was an episode that talked about bread and its origin, really interesting, if you like these kind of things 🙂  That was the point where I really understood what sourdough bread was, I had already heard the name several times before, but I just thought of it literally, like oh, a bread that is sour (kill me now! sometimes ignorance isn’t bliss…hahahaha). And so began Rafael’s journey to make his own sourdough starter (homemade yeast), if you look at the starter’s ingredients (flour and water), you think, how can this go wrong?! But guys, it can go totally side ways, these single-celled organisms are fussy and depending on the air, temperature and environment, they won’t grow as they should. In fact, Rafa’s first attempt on doing it went wrong, and he had to start the process all over again. I’m not going to share his recipe here, because he doesn’t really have one…hahahha he followed French Guy Cooking basic rules to make it, but used other types of flour. That is another thing that can be tricky to find, strong bread flour, even here in Germany, the land of bread. 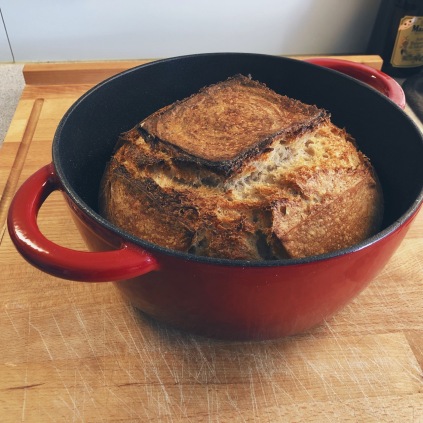 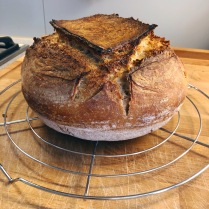 In the beginning, the bread didn’t have much air bubbles, and it was more dense.

In the end, Rafa’s perseverance was the key to success, it was a long road, sometimes hard and sometimes fun. His first homemade sourdough bread compared with the one he did last week was ok, and we really thought at the beginning that it was really good, but the starter also gets stronger with time, which increases the flavour of the bread. So naturally, every bread you bake isn’t going to be like the last one, just keeps on getting better and better, especially if you get creative and use different types and ratios of flour, the amount of starter can also vary, and you can clearly taste it when there was more or less starter involved. Of course baking sourdough bread is a little more work than the usual homemade bread with store bought yeast, but the taste is so much more incredible…I have no words to describe it! hahahha Now, Rafa bakes a loaf per week, and it usually lasts four to five days, it has become a routine in his life. And I’m so glad that it did, because it’s one of the things in life I enjoy the most! 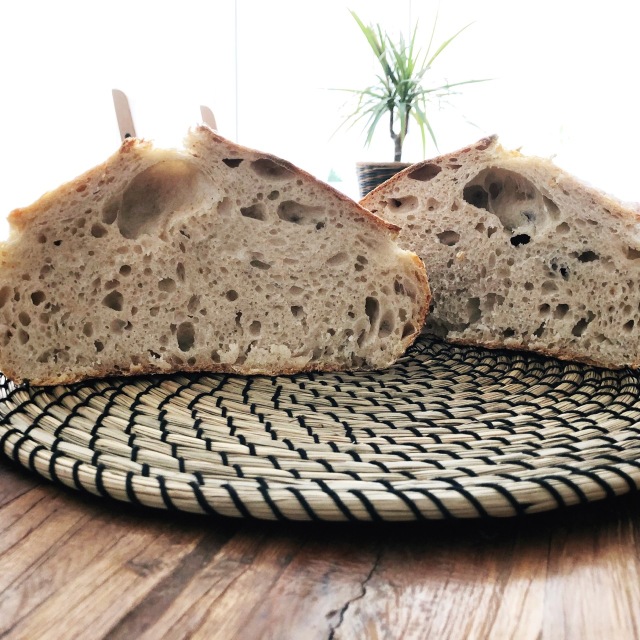 How the sourdough bread looks like nowadays, less dense with more air bubbles 😀

As you can see above, we enjoy our sourdough bread not just at breakfast, it’s a great bread to make bruschetta, pan tumaca and it also goes well with salads, like caprese.

So I’ll end this post hoping that I have inspired you to make your own sourdough bread at home, and if you have any questions, I’ll be happy to answer them on the comments or by e-mail 🙂

Love you sourdough bread, you changed my life ❤ ❤ ❤ 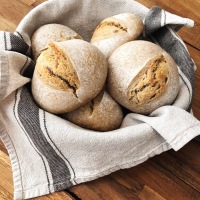 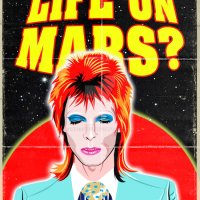